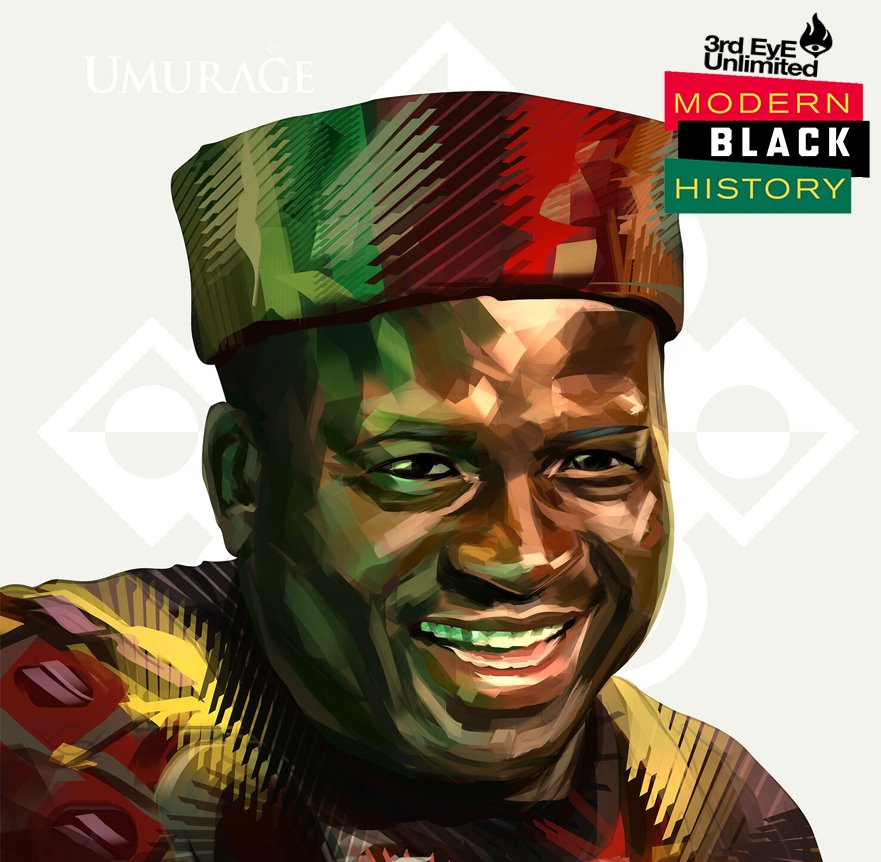 Imagine you were born in Zimbabwe. Imagine circumstances forced you to drop out of school when you were 16. Imagine you dreamed of becoming a performer and literally joined the circus. Imagine you made a name for yourself and got the break of a lifetime: a contract to do a show in the US. Imagine you put together a group, train them and the show is cancelled. What do you tell all these young people whom you had raised the hopes of conquering the world stage? What else can you offer them, so they don’t give in and think that all the people who say entertainment is not a real job are right? That they should look for a real job instead of wasting time in those no-sense?

Today, I am inspired by Winston Ruddle of Zimbabwe. Winston was born in the outskirts of Bulawayo in 1967. He had a rough upbringing. He never knew his father, and his mother valiantly raised him as a single mom. She never had any other children, so it was just the two of them. Unfortunately, she passed away when he was just a teenager.

He was practically on his own at the age of 15. He dropped-out of school, as he couldn’t afford it anymore. His aunt and uncle taught him a few skills to help him survive in the world – her, to cook and him to repair any type of engine – but his heart was elsewhere. Young Winston wanted to become a performer.

It was the early eighties, and in those days, breakdancing was hot!! Everyone wanted to get in on the act. He did put together and group and went on performing on the streets for a couple years. Till the dance phenomenon imported from the American streets started to fade out. He knew it was time to move to something else, but he wasn’t sure what it would be. Till he one day saw a poster advertising a troupe of acrobats from Zambia performing in the capital Harare.

Winston went to Harare and bought the precious ticket for the show.

‘‘I was amazed! Straight away I thought that’s what I want to do. There were these three acrobats and they were performing stuff I had never seen.”

He couldn’t wait for the show to be over, so he could talk to the performers. He courageously approached them and asked if he could train with them. Much to his surprise, they agreed and took him in.

“I started off as a tent and stage hand. There used to be this funny clown named Chunky working there, and I used to imitate his acts without his knowledge. One day, he got arrested three hours prior to the show which got the owner panicking! I told the owner I knew all the acts that Chunky performed so he let me replace him after a quick audition. He liked my performance and that’s where my career started.”

Though making people laugh got him the job, he was more interested in becoming an acrobat. With the athletic abilities and the skills he had acquired as a break-dancer, Winston had no problem getting into acrobatics. He learned the trade so quickly, he even started coming up with new moves and convinced his new team-mates to hit the streets and share their talent with the crowds.

Their band was gaining a lot of traction and supporters. Winston felt he need to become more professional if he wanted to remain relevant in his chosen career.

In 1990, Winston left the band and travelled to South-Africa. He had heard their southern neighbour had more circuses to choose from. Within a few weeks, he had auditioned for one and was put on a contract for six weeks.

The rest was history as you might say. After that first gig, the 23 years old joined the famous Boswell Circus, which was created in 1913 in Johannesburg by three brothers, Jim, Walter and Alf Boswell. The Boswell Circus made history from its start some 100 years ago as it was one of the first shows to allow racially mixed audiences in the ten racially divided South Africa.

Winston returned to Zimbabwe in 1993, eager to build his own troupe of young acrobats. He called it ‘The Amazing Zimbabwe Brothers’. His move paid off: within three years, they were touring the whole country and making enough money to consider their next move.

Winston now had his eyes on another big Circus country: Australia. He wasn’t sure his teammates would understand this move, so he kept it a secret till it was time to leave for the airport for his flight to Perth, Australia’s fourth largest city.

“I’m going to Australia to look for work and if I find it, I’ll send for you”.

They didn’t believe him and told him he was crazy to wander off like that.

Winston’s resolve paid off: within days, he had signed a contract with the critically acclaimed Silvers Circus, one of the top ten circuses in the world. He immediately told the circus that there were more ‘of him’ where he came from. They told him to bring them over as well.

Winston called his teammates, his brothers as he calls them, and asked them to pack and join him in island continent. This time, they didn’t say he was crazy, they obliged and jumped on the first plane to Perth!

Their big break came when Adam Dion Bahoudian, the renowned producer, asked them to star in his new show! Adam Dion is not anybody: he has produced shows for television, including award winning TV series, film and live entertainment He invests a lot in scouting for talents everywhere in the world and involve them in his productions. Of late, Adam has created, written and produced numerous stage shows and special event spectaculars including ‘Hidden Palace’ the show in which he asked Winston and his friend to play in.

The brothers new chapter was to take place in Australia’s Gold Coast, the coastal city of Queensland, about an hour away from Brisbane.

A multi-talented artist, Winston continued to make a name for himself. In 2002, he was offered a contract in Las Vegas for a circus show. He went to Tanzania scout for talents, as he had heard there were many skilled young people in the country of Mwalimu Nyerere. He put together a band and they prepared a show together, ‘Mother Africa’. Unfortunately, when he presented the show and the artists to American company that had hired him, they didn’t like the concept and cancelled the contract!

There he was, with a concept, a troop but nowhere to perform! Stay calm and breathe! The resourceful entertainer turned producer ‘literally’ opened the yellow pages and started looking for places where they could perform! Once again, his determination paid off. The concept snubbed by the Las Vegas firm was embraced by many other stages. Circus Mama Africa (Cirque Africa in short) was born!

“In the end, we got so much work that I had to open an acrobats’ school to meet the demand. It went from a small mistake to a big success.”

Founded in 2003, the Dar Es Salaam institution is one of a kind! Hakuna Matata (‘no worries’ in Swahili) is in Mikocheni, a neighbourhood of Tanzania’s capital. All the students come from modest backgrounds – many of them don’t even eat at home and rely on the school to feed them – and have some of the most amazing acrobatic skills you will ever see.

The facilities are rudimentary – actually, Hakuna Matata looks more like a big gym than a school – but it is the spirit of the founder and his Amazing Hakuna Matata Acrobats that captivated and continue to captivate the world. Since its creation in 2003, the school has trained over 300 acrobats, 80 percent of whom are Tanzanian. Its alumni have gone on to the international stage, as part of Circus Mama Africa, but also in other productions. In just 15 years of existence, the amazing Hakuna matata acrobat have performed in over 25 countries including a Germany, Switzerland, Belgium, Austria, The Netherlands, The United Kingdom, Spain, France, Italy, Australia, New Zealand, Singapore, Philippines, Indonesia, Lebanon, South Africa, Egypt, Dubai, Bahrain, Qatar, Macau Brazil, and I am sure I missed a few.

In 2008, 19 members of the Amazing Hakuna Matata Acrobats were offered a 10-year deal by Franco Dragone – a former Cirque du Soleil producer – to star in Macau based ‘The House of Dancing Water’, the largest water-based show in the world. In 2013, another 32 acrobats were contracted by Alain Pacharie of Cirque Phenix to star in Cirkafrika, which will go on for its third world tour in December 2018.

Winston Ruddle, now a hyper-active 51-year-old fondly called Papa Africa, is the first black African anywhere in the world to own, direct and produce a circus show in a big top circus tent. Circus Mama Africa is credited to be one of Africa’s largest circus production and one of Africa’s greatest entertainment export.

Cirque Africa is no small machine: the mobile caravan is made up of 70 Tons of circus equipment, professional sound lighting and stage equipment, elevated seating with a capacity of seating 1100 people, a 12m high 35m diameter fully circus big top tent with a 11m diameter performance stage, 2 foyer tents and a back-stage tent measuring 8m by 35 meters. To that, you had a traveling cast of 50 of Africa’s finest acrobats, aerial artists, jugglers, foot jugglers, stilt dancers, contortionists, and magicians, and the 8 piece’s Circus Mama Africa band.

But don’t you concern yourself with any of that when you go and see the show.

“Cirque Africa is uniquely African, and its entire cast is from Africa. The show differs in the way we present the acts, the music, the costumes and the presentation – every part of the show is authentically African. Our energy is also unparalleled, and it is that core element that makes the experience so unforgettable for the audience.”

The show has been seen by more than 2 million people worldwide. They just finished a sell-out season off Broadway and are now in Adelaide, Australia.

Just hold on tight to your chair, some of the acts will scare you to death!

And you never know, you might also want to join the circus?

Right Your Legacy, Winston, our Papa Africa! You’ve achieved the impossible and brought Africa centre stage in an industry none of us was ever so prominent before! Thank you for encouraging the continent’s amazingly gifted youth and reassuring them that acrobatics is indeed a very real and rewarding job!