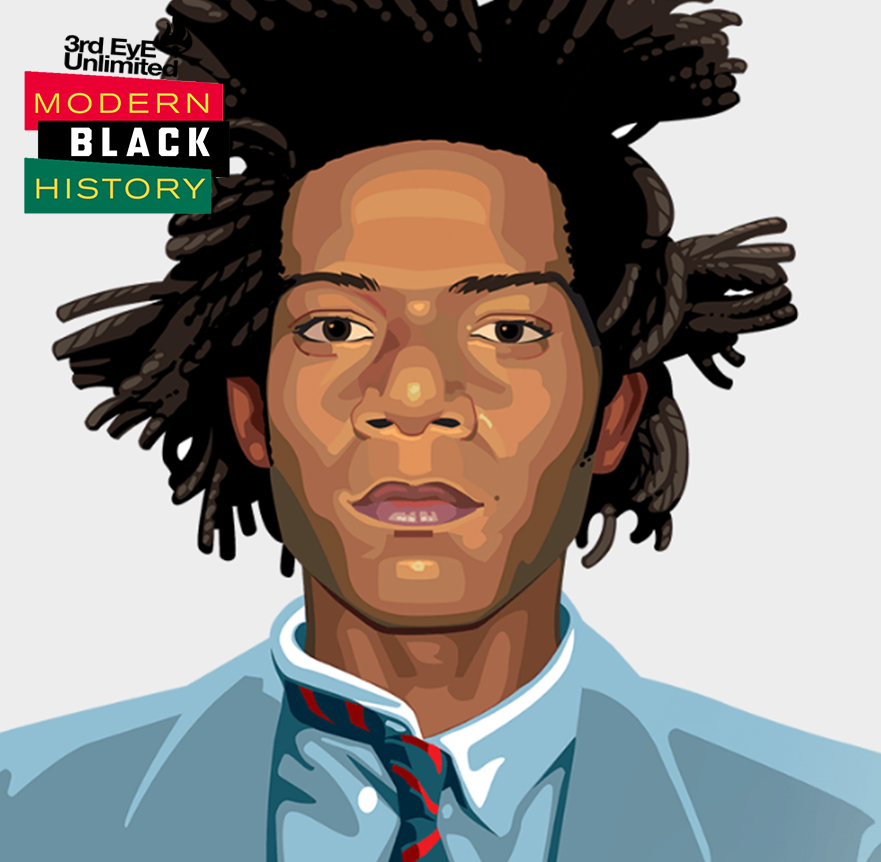 Eight short years. That’s how long it took Jean-Michel Basquiat to secure his legacy as an art world prodigy. He died at the age of 27 from a heroin overdose, leaving behind paintings, drawings and notebooks, many of which explored themes of counterculture American punk, the urban plight of the African diaspora, improvisational jazz music and the vagaries of fame during the Ronald Reagan-era 1980s.

Born to a Haitian father and Puerto Rican mother, Basquiat dropped out of high school and cut his artistic chops as a graffiti artist in Soho and Manhattan, New York’s Lower East Side. He had his first important gallery show in 1980 and soon befriended the pop in pop art stars Andy Warhol and Keith Haring. Basquiat was handsome, fashionable and famously eccentric. He produced vibrant and emotional canvases with a kind of refined cool reminiscent of improvisational jazz greats such as Charlie Parker, Thelonious Monk and Miles Davis.

The drawing in Basquiat’s best-known pieces may be primitive-looking at first glance, but the images were sexy, complex and sophisticated. While his worldview was undeniably black, urban and hypermasculine, his bold paint-splash technique was influenced more by modern abstract masters Jackson Pollock and Cy Twombly. But there is a definite through line to early 20th-century African-American greats such as Romare Bearden and Jacob Lawrence to contemporary artist Kara Walker. His most recognizable motifs — a black male oracle who wears a bold king’s crown, West African griots and ferocious figures sharing space with childlike scribbles — appeared in many of his most famous pieces.

As influential as Basquiat is, most of his work is privately owned and very few public galleries or museums own or exhibit any of his best-known pieces. His paintings very rarely appear at auction and now attract stratospheric prices when they do. In May 2016, Basquiat’s 1982 Untitled painting shattered his auction world record when it was sold for $57.3 million at Christie’s, making him the most financially successful African-American painter in history. Celebrity collectors of his work include Leonardo DiCaprio and Johnny Depp, and an entire generation of hip-hop artists — Kanye West, Lil Wayne, Killer Mike, Rick Ross and J. Cole — routinely name-check the Brooklyn, New York-born cool kid. Basquiat fanboy (and collector) Jay Z even bragged in his 2013 song Picasso Baby — It ain’t hard to tell, I’m the new Jean-Michel. In other words, legendary dopeness and enigmatic brilliance will never go out of style. – Jill Hudson