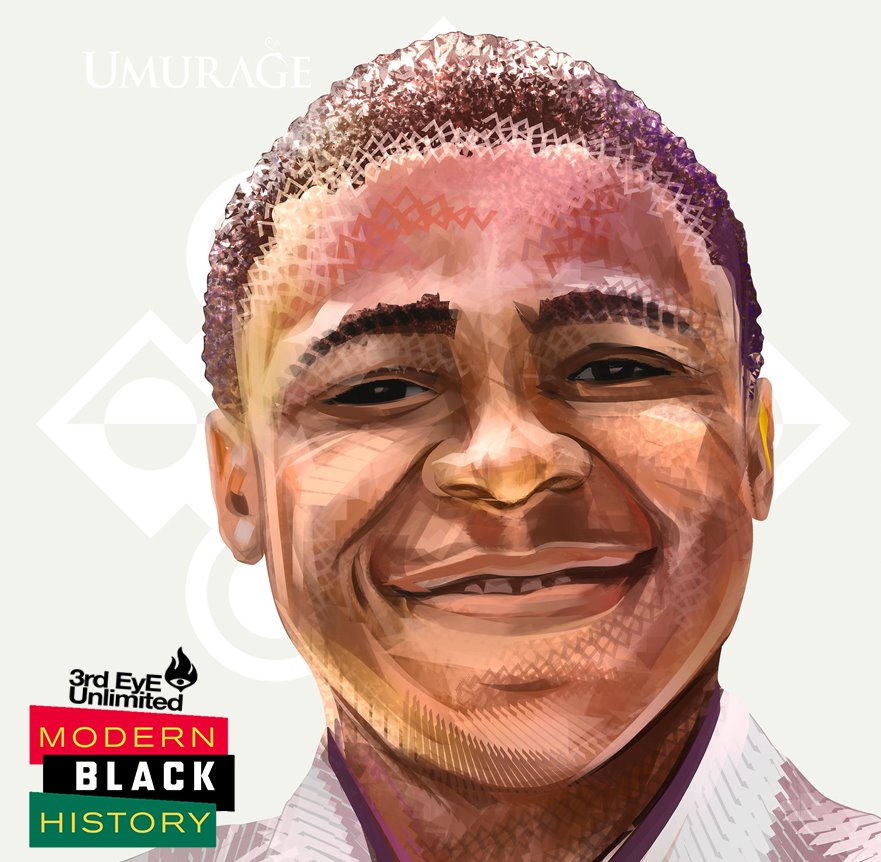 Imagine you grew up in a poor neighborhood of your country, mid-way through your country’s deadly civil war. Imagine you developed a kin interest for electronics and dreamed of becoming an inventor. How would you achieve that dream, in a country recovering from war, you, a kid from a poor family?

Today, I am inspired by Kelvin Bokai Doe of Sierra Leone. Born in October 1996, Kelvin is the youngest child of a family of five children. He and his siblings were raised by their single mother, Adjua Daniels. When he was born, his country was in the midst of one of the deadliest civil wars on the continent’s history, a war that last 10 years and that ended when Kelvin was 6 years old.

Their family lived in the Dworzark Farm, one of the poorest neighborhoods of Sierra Leone’s capital. Around age 10, Kelvin started developing an interest in electronics. Let me rephrase it: Kelvin was interested in fabricating electronic material. Yes, at the age where other kids where carefree, Kelvin mind was working 100 km per hour.

Since he could not afford buying the spare parts he needed in order to make his creations, he would spend time looking for used parts by the streets and in the nearby scrapyard. He knew his Mom wanted to keep their small three-room house tidy, so he would wait around midnight, when everyone was sleeping to bring in his findings of the day in the house. The living room was his lab: he would spread the junk on the floor and rummage through it to see if he could find something he could use.

He tried not to make any noise, but their house was very small, so inevitably, his Mom would wake up and come to find him sitting on the floor in what was to her eyes a pile of rubbish. She would convince him to go back to bed, but then he would be at it the following night, to the point she started wondering what the future held for her youngest son.

But Kelvin wasn’t looking at parts randomly. He had one of those minds that can visualize things no one else could see, he would assemble the parts in his head and try to turn his inventions into reality. And it wasn’t from anything he’d learned at school or in a book; it was all in his mind.

Of course, most of the things he imagined didn’t work the way he had in mind – some didn’t even work at all – but that didn’t stop him from trying. And he finally succeeded: at age 12, young Kelvin surprised his family, his friends and neighbors when he built a few equipment that actually worked!

“I built a three-channel mixer, a sound amplifier and a microphone receiver. Putting all these together, I realized I had built a music set!”

He decided to use his music set to entertain the neighborhood and took the name DJ Focus. Why ‘DJ Focus’? Because Kelvin believes that if one focuses, one can achieve anything in life.

At the age of 14, he took his DJ activity one step further: he added an FM transmitter and an antenna to his set and started a community radio, which he used to broadcast news to his neighbors and play music requests. The radio station was powered by a generator he built him-self!

It will come as no surprise to hear that the local media talking about this young inventor/DJ!

One day, a fellow Sierra Leonean heard about him in a news-show and he decided to invite Kelvin to participate in a competition he was organizing. His name was David Sengeh, an extraordinary young man as well. David Sengeh was born and raised in Sierra Leone, before he went to study at Harvard University , where he graduated with a Bachelor’s Degree in Engineering Sciences. He went on to pursue his studies at the Massachusetts Institute of Technology – yes, the famous MIT – where he completed a Master of Science in Media Arts and Sciences, and a Ph.D. in Biomedical/Medical Engineering. I will tell you David’s story in one of my upcoming portraits, he is one of those people who will inspire you to unleash your creative potential.

Back in 2012, the 23 years old David was doing his doctorate studies and had come home to organize a summer innovation challenge. It was of a kind. With “Innovate Salone” (Salone is short for Sierra Leone), David wanted to encourage young people to develop a culture of solving problem and tinkering. He challenged the participants to think about issues facing their local community and come up with solutions.

Kelvin was excited to be part of the competition so he started looking around in his community to see what problem he could try and address for them. What he thought of will surprise you. Electricity was and still is one of the biggest issues in Sierra Leone, if not the biggest one. Sometimes people could have power one day a month, and not even the whole day, just a couple hours. Kelvin thought to himself, if he could make a mini generator for his radio, he could try and build something more powerful so his neighbors could also benefit from it.

“There was a big electricity problem and school kids were suffering not being able to study at night, so I decided to make a battery that would provide electricity to some people. Sometimes, lights would come on once a week and the rest of the month it’s dark.”

Kelvin made a battery using a combination of soda, acid and metal, wrapped together by tape and after a few trials, it was working!

David Sengeh, the MIT student who had organized the ‘Innovate Salone’ competition was so impressed with the young man he decided to help him get more exposure. In September 2012, 6 months after his participation in the competition, something unimaginable happened for the teenager who had never ventured 10 miles beyond his home in Freetown: he was invited to the United States to participate in the 2012 World Maker Faire in New York! And he wasn’t there as a mere visitor, he was invited as one of the speakers on a panel called “Meet the Young Makers” with four other amazing young inventors. Kelvin Doe was the only African on the panel!

Kelvin wowed everyone with his creativity and his self-assurance and was awarded the Auditor Choice Award. During the same visit to the US, in October 2012, Kelvin was invited to participate in the “Visiting Practitioner’s Program” at the Massachusetts Institute of Technology (MIT). He was the youngest person IN HISTORY to have ever been given this honor!

His life was about to change even further. An American media company documented the prodigy’s story, uploaded it on YouTube and the rest was history: the video became viral the instant it went online, rapidly reaching the millions of views worldwide. To this date, his video has been viewed by more than 4.4 million times! The story was immediately picked up several news organizations, including CNN, NBC News, and The Huffington Post!

Once a local community celebrity in Dworzark Farm, Kelvin had, practically overnight, become a worldwide sensation. In 2013, he was featured as a speaker at TEDxTeen where he once again wowed the public and was invited to lecture – yes lecture – to undergraduate engineering students at Harvard University! Are you keeping track of his age? All that was happening when he wasn’t 16 years old yet!

While he returned to Sierra Leone to finish his high school, Kelvin life was far from the ordinary life of a normal student. His return home was triumphant! The whole country had heard of him and was proud to have been represented abroad by such a smart young man.

The September 2012 trip to the US was only the first of many that would bring him back to the US, to the Middle East and to other African countries. In 2013, he was invited as a keynote speaker at The Clinton Foundation’s Global Initiative conference in New York. He was later featured as guest speaker at the USAID Powering Agriculture Project in Washington DC – a conference attended by William Kamkwamba as well. He also spoke in a Google Conference in Tel Aviv Israel, in the SAPPHIRE NOW Conference in Florida, in the Middle East’s first Eco Club in Abu Dhabi and toured Universities in different African countries.

In 2014, Kelvin was included in the magazine Fast Company’s list of the 100 most creative people in Business in the world and in 2016, at age 19, he made the prestigious Forbes Magazine’s 30 under 30 (30 leaders under the age pf 30). He also became an Honorary Board member of Emergency USA, an organization with a mission to provide free medical and surgical care to the victims of war and poverty.

In October 2016, just days before he turned 20, Kelvin was featured again in a TED Talk, this time in Lusaka, where he talked about Changing Africa’s Narrative.

His recognitions include the African Most Influential Award in 2014, the GUBA Black Star award (Ghana) and Sierra Leone’s medal of the Order of Rokel, this latter making him the youngest Sierra Leonean to ever receive such an award in his country’s history.

He has met more world leaders than any of us will ever meet in a lifetime, including former US Secretary of State Hillary Clinton and Ghanaian President, Nana Akufo-Addo.

As you can imagine, his mother, who used to lament “What sort of child is this God has given me?” is no longer worried about her son’s future. On the contrary and she is grateful for all that God has done to their family, thanks to their son’s gift.

“It was Kelvin who first got me to enter State House [Presidential Palace]; Kelvin who got me to sit in a plane and go to America.”

One of their most memorable moments is when he took his Mom to tour the White House in Washington!

Yet, he remains surprisingly grounded. Though fame and a life of traveling was appealing for a while, Kelvin realized that it was a bit too much pressure for his young age and it was keeping him away from focusing on what he really wanted: to study and increase his knowledge beyond what he taught himself in Sierra Leone.

I am proud to announce that of all the place in the world where he could gone to study, he chose my hometown of Toronto, where he has lived for more than a year now and is preparing to enter University.

So, don’t be surprised in a few years down the road if tell you that Kevin is now an Engineer, a Doctor, a Physicist, who knows. The sky is the limit!