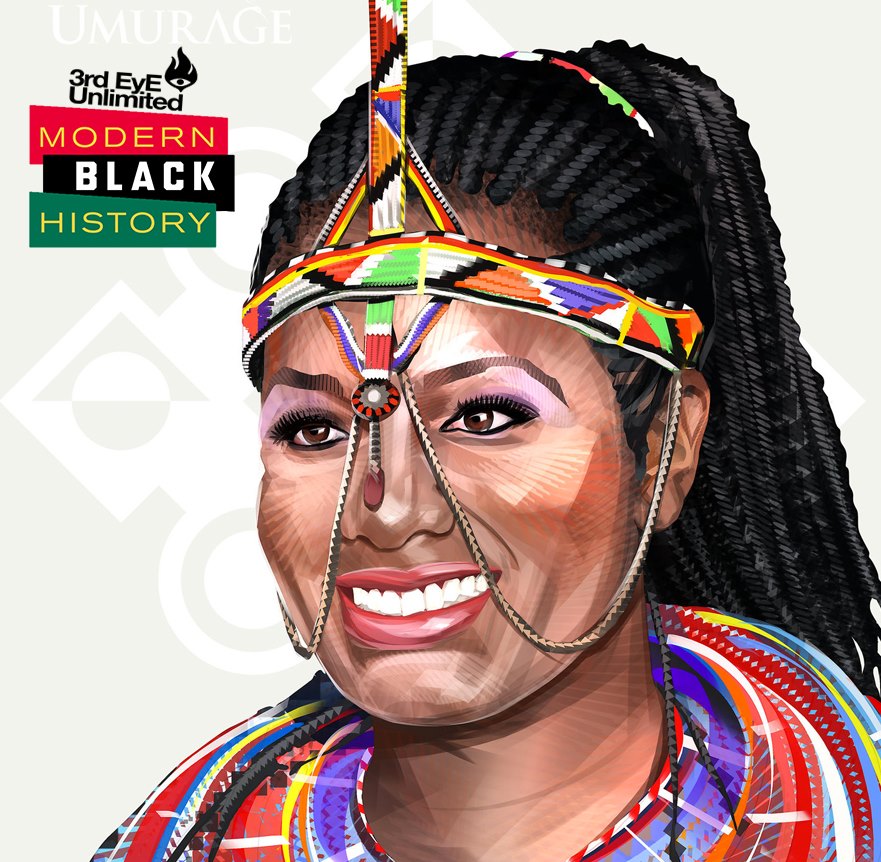 Imagine you were born in Maasai country, in Kenya. Imagine that, as a girl, tradition wanted that you’d be excised before you reached puberty. Imagine you did not want that life for you or for any other little girl in your community? What would you do? Would society let you challenge their ancestral traditions?

Today I am inspired by Nice Nailantei Leng’ete of Kenya. Nice was born in 1991 in Kimana, a Maasai village in Kenya’s Rift Valley Province, some 226 km from Nairobi. Tragedy came banging at her family’s door when she was 6 years old: both her parents died a year apart from each other. After the death of their parents, her older sister Soila and herself were raised by relatives.

As young Maasai girls, their fate was practically sealed at birth. Between the age of 9 and 12, they were to undergo the mandatory rite of passage to womanhood, excision, before being forced into early marriage, having kids and preparing their own daughters to the same life journey.

But Nice did not want that life. She had seen the trauma and suffering caused by the “cut” to her friends, and she did not want to suffer the same fate. She had even seen some girls dying from the bleeding and other complications of this operation performed in highly septic conditions and it scared her to death.

Nice saw a glimpse of hope that her life could be different when she was sent to boarding school at age eight. She was amazed by the world of possibilities that education opened her to. School was also a place she was going to discover a truth she had never suspected: she had the right not to get excised. But then, she wondered, how does a little girl living in the heart of Maasai country exercise such right? She saw no other way out of that seemingly inevitable experience than escaping the place where she was born.

When she returned home, she convinced Soila, who was two year older than her, to run away. The young girls waited in through the night and left in the wee hours of the morning. They wanted to go to their aunt’s house in another village. She lived 70 kilometres way, but the distance did not matter, all that mattered in their mind was what they were running from. They run through the bush to avoid being seen on the road, and hid under the savannah’s trees to take some rest.

“When I was hiding in the tree I was thinking: will they find me and force me to go through the cut? I saw death because of circumcision, and I was worried that I might die, or if I did not die I would not be able to go back to school and I would be married.”

Unfortunately, their uncles and other men from the village, who had come chasing after them, found their hiding place, some 20 kilometres from home. They beat the two girls without mercy and warned them not to try anything like that again.

The following excision season her sister gave in and accepted to undergo the “cut”, hoping in a way that it would make the elders spare her younger sister.

Nice was more determined than ever. She ran away again and found refuge at her grandfather’s. he begged him to let her go back to school, to protect her from the cut and the old man finally gave in.

The community shunned her for her choice to turn her back to a tradition they considered of the utmost importance. In those days, Nice was the only girl of her age who had not undergone the cut in her village. She was seen as a “bad example”.

“There was pressure from girls, the community, my family to have the cut and quit getting an education.”

Soila Leng’ete life was completely different from her younger sister’s life. Soon after being cut, Soila was forced to leave school and get married. She was to have two kids before she was even an adult.

Nice pursued her dream of getting an education despite all the pressure.

“Once you are empowered from going to school and getting an education, you can make more decisions yourself and become the woman of your dreams.”

Another dream had formed in her young mind: to free other girls from the cut and give them the opportunity to have a different life path.

“I realised that if more girls were like me and did not undergo female genital mutilations in my community then things would begin to change – there would be more Nices and so it would not be seen as just something I was doing alone.”

An opportunity to act and make that dream a reality was going to come her way in 2008, when she was 17.

A non-profit organisation called Amref Health Africa came to her village to give medical training to the youth. The Elders authorised them to train one boy and one girl. Though the Elders still saw her as a bad example for not undergoing the cut, Nice was the only girl who could write in the village and they grudgingly allowed her to follow the training.

The teenager took the training seriously, learning for the first time in her life about sexual and reproductive health, Female genital mutilation or cutting – FGM/C – and child marriage.

The NGO also taught the two youngsters how to talk about them and raise awareness amongst their counterparts.

It was a life changing experience, literally. Soon after the training, Nice started touring the community, sensitizing everyone about the risks posed by thi ritual, performed by lay practitioners with little or no knowledge of the risks posed to the young girls and the sequels they would carry for the rest of their lives. She had strategically chosen to focus on the Elders and the young men, knowing that they held the keys to the change she wanted to see happening.

She was so passionate about this advocacy work that she went on to create an initiative, the Alternative Rites of Passage, to showcase other ways of preparing young girls to become women.

Her efforts paid off when she was able to save a first group of 17 girls from the cut. A big victory!!!

Today, her programme is credited to have helped prevent more than 16,000 FGM/C procedures across Kenya and Tanzania!

Her work has also contributed for major changes in her country’s laws. In 2011, Kenya outlawed female genital. According to Kenyan official numbers, rates of cutting among women aged 15-49 have dropped from 37.6 per cent in 1998 to 21 per cent in 2014. However, the battle is far from over as FGM are still conducted secretly in homes or in clinics by healthcare providers and workers and rates are still higher in rural communities than in the cities.

The biggest change was to come a few years later. In 2014, the Maasai elders, who rule a 160,000-kilometer territory stretching on both sides of Kenya’s border with Tanzania, between the Kenya Mountains and Kilimanjaro, and count over 1.5 million people — declared the end of the practice of FGM!

Today, the name Nice Nailantei Leng’ete is a household name in the fight against Female Genital Mutilation in her country and the world.

In 2013, Nice spoke at the Clinton Global Initiative in New York about her campaign to stop FGM and gave a a TEDx Talk on sexual and reproductive health rights. In 2015, at age 24, she received the Inspirational Woman of the Year Award from the Kenyan Government. A year later, she was one of the recipients of a Mandela Washington Fellowship for Young African Leaders, an initiative of the US government initiated under Barack Obama’s Presidency to empower young people through academic coursework, leadership training, and networking.

In 2018, Nice was recognized as one of 300 global youth leaders by Women Deliver and was awarded Annemarie Madison Prize for her commitment to stop FGM.

Later in the year, Nice received the Top Honour of being named as one of the 100 most influential people in the world by Time. She was 27.

Nice, who was shunned as a young girl, is now highly respected in her community. The Elders recognised her work in their own way when they gave her the Black Walking Stick, a great symbol of respect and power. She is the only woman to have even been giving that mark of respect on her village.

“We’ve come a long way since we saved the first 17 girls from FGM/C in my community. Because we involved the whole community and listened and talked together. The whole community needs to be part of the change and they need to lead the way… It’s not one person making the change.”

The fight against FGM is far from being over and requires for all of us to play a part in it. It is estimated that at least 200 million girls and women alive today have been through FGM, and an estimated 3 million girls are at risk each year.

Thank you Nice, you are a true modern age warrior! Right Your Legacy!